The last outing with my brother was a complete disaster. Last March, when he was here; we had taken him to Yelagiri hills with an aim to do Paragliding and also to escape from the Bangalore’s heat…. However, to everyone’s disappointment, the so called “poor man’s Ooty” turned out to be a scorching hot place & the Paragliding there, was shut down long back. To further add to his frustration, we also made him pedal a boat in the hot sun……

Since then, he never believed in our “Eco… Nature… Adventure” Holiday theme which we were so proud of. He always mocked us, saying that, “For Prasad & Priya, Eco & Nature were synonymous to visiting a nearby hill & Adventure was synonymous to a mere boat ride.” We were so geared up to prove him wrong, on his recent visit.

We decided for a day visit to Jungle Lodges @ Bheemeshwari, to try their new adventure package which included Zip-Line, Parallel-Walk, Burma-loops, Kayaking & Coracle Ride. In spite of my strong persuasion to start early, we ended up leaving Bangalore at 9.00am & reached Bheemeshwari around noon. 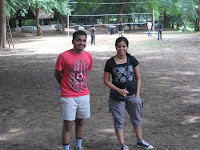 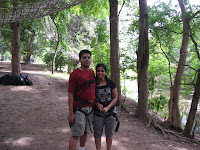 The first group of tasks was to complete the Burma Loop & Parallel walk followed by Zip line before we could grab some lunch. I decided to lead the brigade of 3 for the first task of Parallel walk. However, the initial few steps of the upward climb on the shaky ladder brought tears to my eyes and I returned back to the ground. The man of the house, “Ms Priya” attempted next. Even with a shaky start, she managed to cross the two rope bridge. My next attempt was at the Burma Loops or the “Inca Walks”. Traversing across the swaying rope bridge really needed a gutsy effort. I almost had my heart in my mouth as soon as I reached the center & looked down!! I gave a miss to the Parallel Walk. 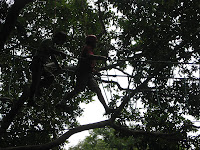 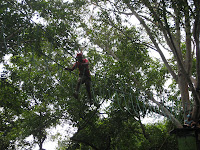 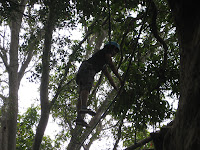 The next activity was the Commando Drop or Zip Line. The slide down on the wildly swaying rope, 40 feet above the ground, really evoked fear and brought out the lord’s name!!! For Ninad, all the three activities were a cakewalk. 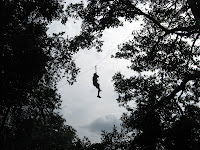 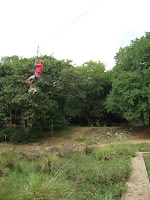 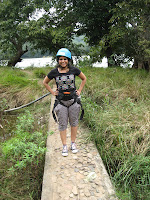 With our growling tummies, we headed straight to the “Ghol Ghar” for lunch. Chilled beer served with homemade like chicken curry & egg curry really helped us to rejuvenate for the next set of adventure activities.

Kayaking through the rocks & boulders of the majestic Cauvery River was another mind blowing experience!! The Coracle ride again through the Cauvery was like an icing on the cake. After a final round of coffee and “garam pakodas” we left for Bangalore. 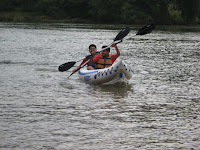 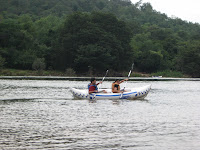 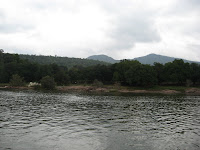 The getaway, I believe is an ideal one for those who would love to enjoy the calm environs with a dash of adventure. Finally we managed to convince Ninad that our weekend getaways are based on the theme of “Eco... Nature… Adventure……” and by Adventure, we mean the real feel of adrenaline rush!!!
Posted by Priya - Prasad at 7:01 AM No comments: