Thank you, LORD , for my idiot friends!!

Yes, I proudly say, I have 2 idiot friends Lalu & Ravi. We 3 idiots met during the 2nd year of engineering college. We all were average students who had taken up engineering only because our friends opted for it and landed up in DY Patil COE because our parent’s had contacts with founder of the college. Engineering never interested us and therefore 90% of the time we spent outside the college. The 10% we visited was only to mark attendance when our names appeared in the black list. We enjoyed the max in those days, witnessed several movies, parties, played pool, tapri gangs, late night so called "submissions” n much more…all during the campus days.


All these memories got refreshed, when Ravi and Sheetal (his wife) visited us last weekend. They arrived here on Friday. Friday afternoon went in introducing each other and unveiling the mischievous side of Ravi to Sheetal. Evening, we played bowling and ended the night with a quiet dinner at “Angeethi” with only 1 drink for Ravi and me to enjoy. This was the time Ravi and I realized that we have lost it all!!!


Saturday, we decided to leave early and visit Srirangpatanam, Mysore & Ranganthittu Bird Sanctuary. We had booked our stay with Hotel Ginger. With target set to leave at 6.30AM all focus shifted to Ravi. Since college days, Ravi and his hibernation stories have been legendary……: P


We woke up at 6.30AM, but thanks to the perennial water and electricity problem in Kaggadasapura, we managed only to start by 8.30 AM. Our first halt was at good old Kamat Upchar for a South Indian breakfast. Throughout the drive, Priya entertained the guest by narrating the stories of our previous expeditions and mocking her husband and his driving skills.


Our next halt was at Srirangpatanam. Srirangpatanam was the capital for Hyder Ali and his son Tipu Sultan. Tipu Sultan died here after a long battle with the English kingdom. We visited the Sri Ranagatha Swami Temple, the death place of Tipu(where Tipu’s body was found), Lalmahal palace and the Dariya Daulat Bagh also known as Tipu’s Summer palace. With more interest shown by our beloved wives in shopping than in the places of historic importance, we could sense what was installed in as we reach Mysore……:) 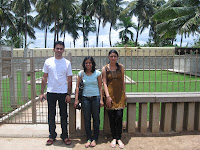 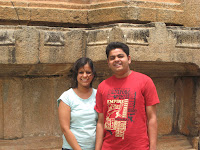 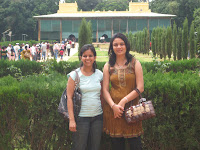 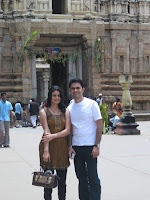 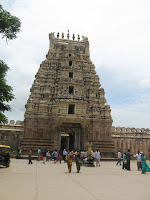 We reached the hotel at 3.00PM and headed straight to the restaurant to satiate our growling stomachs. We then checked in, quickly freshened up and headed to the visit the magnificent Mysore palace. We spent around an hour inside the palace admiring the beautiful painting and the architecture and an hour outside the palace clicking snaps……. We then visited the Vrindavan gardens. After tapping our feet to the musical fountain, we returned to Mysore city for the first round of shopping. Priya and Sheetal got busy shopping sareers and Ravi and I patiently waited outside to clear the bill. We dined at Park lane and then simply crashed into our beds to end the exhausting yet enjoyable day. 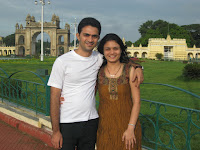 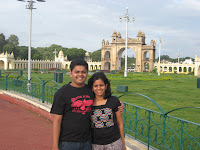 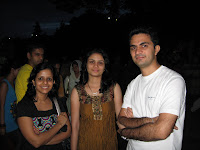 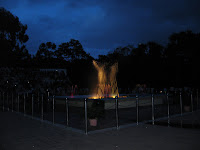 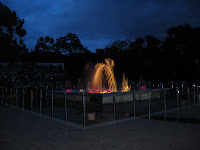 Next morning, we decided to allot an hour to satisfy our shopaholic wives and then visit the Ranganthittu Bird Sanctuary on our way back home. Little did we know that we would end up having a 3 hrs session gaining knowledge on different varieties of Mysore silk and their corresponding rates. It was quite a learning experience and definitely Ravi and I are now well equipped with the knowledge to sell silk sareers.


We left Mysore at 12.30PM. We had to skip the visit to the bird sanctuary and head straight home. By the time we reached B ‘lore, the cab and the pizza was already waiting for Ravi and Sheetal. Hurriedly they packed their bag and left for the airport.


We really enjoyed our time with Ravi and Sheetal and hope they too liked our company. The only person we missed on our trip was the third idiot Lalit. Hope he gets married soon and we all can meet up again……. :)
Posted by Priya - Prasad at 6:53 AM 2 comments: